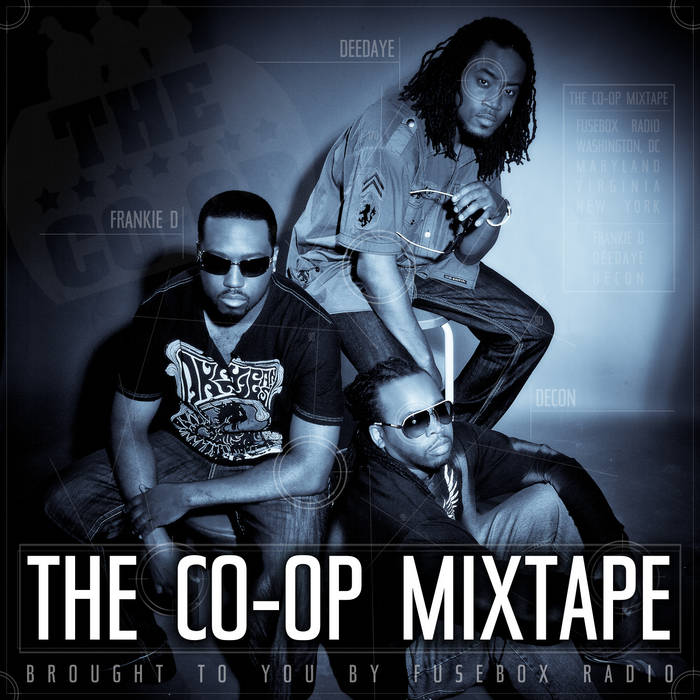 ** This is the uninterrupted mix as one long sound file from "The Co-Op Mixtape (Brought To You By FuseBox Radio)" - feel free to download it to your iPod (or other mp3 player, post it up on your website of choice, preview the mix before downloading the mixtape as separate mp3 tracks and what have you! :) **

Backup Download (in case this one isn't working or static-y): www.divshare.com/download/10563493-ba4

This project is a collaborative mixtape I did with the talented DMV (DC/Maryland/Virigina) Hip-Hop & Soul Music crew of The Co-Op (www.coopmusiconline.com; www.twitter.com/theco_op; www.breakinghitz.com), consisting of members Decon, Dee Daye and Frankie D.

Here's some information about the fellas below - definitely go out and support their music and other projects!

If you are tired of the same old gimmicky hip-hop, Listening to the lyrics of Decon will be a breath of fresh air. The majority of artists out today use music (beats) to bring out the lyrics, but Decon on the other hand uses his lyrics to bring out the beats. It is almost like he creates the music around the lyrics so that it blends to perfection. Which is very impressive because most MC's use beats to camouflage their babbling lyrics. Decon explores a wide range of topics that almost every listener can relate to in some way or another. Once given the opportunity, Decon will take the world back to the purest form of raw underground hip-hop.

Decon grew up in south side Jamaica Queens and slowly made his journey down to Maryland where he currently resides. He has been living and doing hip-hop since the age of eleven. Growing up Decon was influenced by many artists such as Krs-One, Big Daddy Kane, Slick Rick, EPMD, Run-DMC and many more. Decon makes up 1/3 of the hip hop, R&B group called The Co-Op.

Born in Jamaica, Queens, New York, and raised in PG County, Maryland, Dee Daye is the first voice you hear on the Co-Op’s signature ode to the ladies, “Girl”.

Having lived a life filled with misfortune, turmoil, and petty crimes, Dee Daye is recognized as the element of The Co-Op that more or less gives the group its street cred. His rhymes more or less relate to the average dude trying to make moves, stories of life’s ups and downs, as well as relationships from the hood’s perspective.

Dee Daye is a well-rounded MC, who has the innate ability to flow on any number of subjects, not necessarily limiting himself to any particular style or subject matter.

Dee Daye has also produced many of The Co-Op’s songs, including the group’s DC anthem, “D-dot, C-dot”, as well as the ‘uber-sexy’, “Naked”.

Frankie D is the voice that’s heard on the chorus of the song, “Girl”, The Co-Op’s “grown and sexy” hip-hop ode to ladies everywhere.

Also known as “The R&B Component”, Frankie D possesses a vocal style that has often been compared to the likes of the late, great Teddy Pendergrass, as well as that of the late Gerald LeVert. While Frankie D bristles at the notion of even being mentioned in the same breath as those great artists, it is his deep, mature vocal style that enables him to stand-out among many of today’s male R&B vocalists.

It’s Frankie D’s smooth vocals, as well as his penchant for “pillow talk” on the track that serve as the icing on the cake of most of The Co-Op’s music.