MYSELF: A Mixtape in Disguise (Shaken, Stirred & Mixed by DJ Fusion) 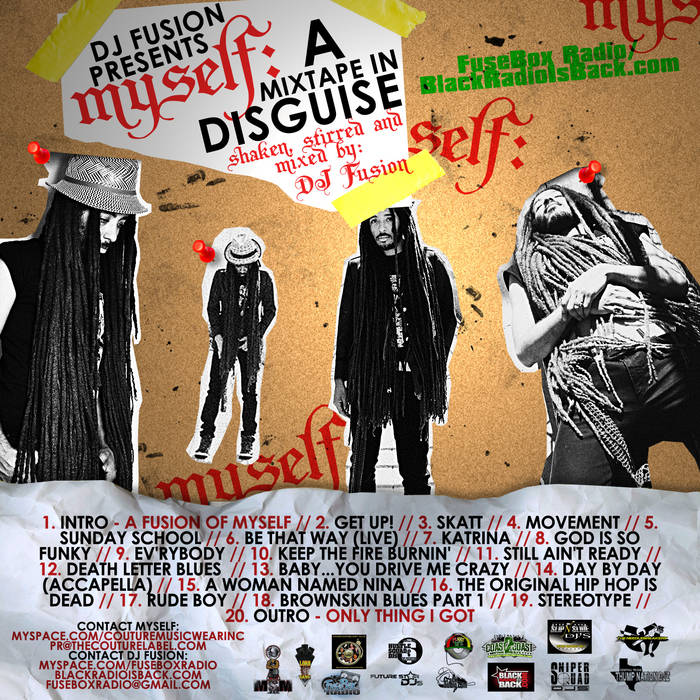 The Afro-Punk rocker MYSELF’s new genre defying future classic album Protest In Disguise (bonus tracks) has struck a chord within the International music community. The album was released during this past summer on his boutique label, Couture Music Wear. It’s been getting rave reviews and has consistently been on the top college/alternative charts.

MYSELF has been featured on MTV, Fox, Okayplayer, BBC Radio, Oricon Biz Hits/Charts, Sir Magazine, Timeout New York, CNet Asia, Punk TV and his single “God is so Funky” was the video/single of the week on Imeen.Usen Radio (Japan’s biggest cable/music broadcaster) recently featured “God is so Funky” as the International street recommended pick hit!

Usen Radio reaches an estimated audience of over 2 million subscribers. MYSELF has managed to move the masses by single handedly creating a musical revolution!

DJ’s worldwide are embracing the album’s funky grooves, thought provoking lyrics and the moshpit mix of Punk & Hip-Hop. Giles Peterson (UK), Barry King (Europe), Guy Perryman (Japan) and DJ Fusion (USA) are some of the top DJ’s globally who are in support of ‘Protest In Disguise’ (bonus tracks).

‘Protest In Disguise’ (bonus tracks) is slated to be released in Japan as a non-exclusive import on Oct.29, 2008 via Ratspack Distribution.

The album will be licensed & released worldwide to foreign territories as of January 2009. In addition to the physical release MYSELF has just released 'A Mixtape In Disguise' the world’s first exclusive (mp3) Punk Rock/Hip-Hop Soundclash featuring DJ Fusion of the syndicated FuseBox Radio Broadcast and BlackRadioIsBack.com (containing un-released tracks, exclusives and re-mixes).

Ivan Alvarez, former Senior VP of Universal Music (Latin America) and CEO of CDA Group Net says “we are thrilled to work with an artist of MYSELF’s caliber’’.
'A Mixtape In Disguise' has also been licensed in the UK by Mr. Bongo Recordings via Universal Music and their related distributors to be out to the public in January 2009.

Never one to be shy in front the camera MYSELF has (2) major film projects coming out soon. 'Behind The Wheel' (music documentary) featuring Oscar Award winning director Oliver Stone will be making it’s debut at the Los Angeles Film Festival and Sundance. MYSELF has a cameo role sharing his personal views about post - KATRINA life in New Orleans. The other film project MYSELF will be featured in is a street drama titled 'Order of Redemption' starring Academy Award winner Tom Berenger and Platinum recording artist Busta Rhymes.

Early 2009 MYSELF will be releasing his DVD 'Gutter Punk: A Day In The Life With MYSELF'. The exclusive DVD will contain his 2 hit videos, bonus band footage, MTV commercial clips, MYSELF on tour in Japan and rare behind the scenes making of his album which was recorded at the Legendary Chung King Studios (recording home for Rick Rubin, Nas, Sublime, Lauryn Hill, Black Eyed Peas, Kanye West and classic hip hop icons Run-DMC).

Music supervisors, film liscensors and TV consultants have been soliciting MYSELF’s music for co-branding, cross marketing and advertisement opportunities. “Music is the universal language that speaks to the soul, but comes from the heart,” says MYSELF “ and I am fortunate and blessed to be able to position myself as an artist in today’s volatile ever changing music climate”.

His band and MYSELF are planning to hit the road and tour extensively in the coming months focusing on a fall/winter college tour & the international festival circuit.